Synopsis: Thomas Hutter is tasked by his employer to visit the mysterious Count Orlok at his castle about a potential property purchase. The eerie Orlok seeks to buy a house in Hutter’s town of Wisborg. Hutter bids his wife, Ellen, farewell and makes way to the castle as a series of strange events occur. After meeting the strange Count Orlok, Hutter discovers to his horror that the count is a vampire and seeks to use Wisborg as his new hunting grounds.

Capping off this week’s look at classic horror film, our final entry is the 1922 silent film, Nosferatu. My first ever silent movie, I must admit that I cheated and stuck on some ambient horror music in the background, although it was mostly to drown out the sound of RuPaul’s Drag Race in the adjacent room. While I may have enhanced the experience, the film itself was fascinating and thoroughly entertaining.

Essentially the first on-screen adaptation of Bram Stoker’s Dracula, Nosferatu was almost lost to history when Stoker’s widow discovered the film was made without the estate’s permission and successfully sued with the court ruling all copies to be destroyed. Thankfully, at least one copy remained. Characters’ names have been changed and plot points amended, but the bare bones of Stoker’s story are here. Director F.W. Murnau cuts out the tragic romance and reincarnated love interest aspects for a more chilling villain and spookier story.

Nosferatu is commonly referred to as a shining example of German expressionist cinema, but this synopsis is somewhat false. F.W. Murnau had plenty of experience in expressionism as a filmmaker, but for Nosferatu he used techniques like shooting in negative, stop motion & fast motion, stock footage from documentaries which were not considered traits of Expressionist cinema. Perhaps the biggest departure from expressionism was Murnau’s decision to shoot the film on location rather than in the studio, a decision that would be to the film’s benefit.

Despite the limitations of cameras at that time, the film remains absolutely gorgeous. The cinematography is masterful with every frame so packed with detail and purpose. Shooting on location gives this film a bigger sense of scope with the beauty of the German countryside and gothic look of the castle. Windows and doorways are frequently used to show the innocence of Ellen in the day and the horror of Orlok in the night. Stop motion, time lapse, and shooting shadows creeping up the stairs all go towards creating an otherworldly presence for Count Orlok, something so vastly different from human.

With so many variations of Count Dracula, none has looked as alarmingly frightening as Count Orlok. Bald, decrepit, with claws and protruding front fangs. There is nothing romantic or charming about this vampire. His monstrous features are matched by his devilish intent, driven only to feed, Orlok does not possess the power to turn his victims into fellow creatures of the night; he simply takes his fill and leaves them dead. More beast than man, Orlok is described as a demon, an unholy spawn of Satan.

With dozens of adaptations of Dracula for both film and tv, none have proved as memorable or influential as Nosferatu. Bela Lugosi’s portrayal in Universal’s 1931 classic Dracula brought the character to the mainstream and is the most famous look of the titular villain. But with this portrayal so ingrained in pop culture, it has been ripe for parody and ridicule over the years. Max Shreck’s Nosferatu is a marvel of early make-up and far more chilling performance. Few horror films can match Nosferatu’s atmosphere and aesthetic. Murnau’s genius vison created a timeless classic with an immeasurable impact on the genre of horror. 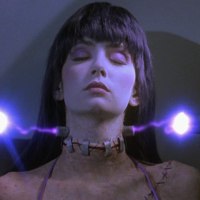