For the past few weeks, self-isolation has seen me scouring through as many films as possible to vacate time between work and meals. After making a serious dent into both Disney+ and Netflix’s catalogues I’ve had a recent itch to explore more low budget and B movie horror. Scarecrows was brought to my attention by a fantastic video on the GoodBadFlicks YouTube channel that really delves into the making of/trivia of the film. After finding it streaming on Amazon Prime, I decided to check it out for myself.

After a group of ex-military mercenaries stages a multi-million dollar robbery, they hijack a plane headed for Mexico. One of the crew betrays them and parachutes onto an unknown farmland. The rest of the crew land nearby and pursue their greedy colleague. They find the land hosts a creepy farmhouse and some unsettling scarecrows. As night falls, strange events begin to occur. The mercenaries realize that the land isn’t as abandoned as they once thought and find themselves at the mercy of horrors worse than them.

Scarecrows stands out amongst other B movie creature features of the era because of the creativity and imagination from such an amateur crew. Many of the actors and crew members were hired with no prior filmmaking experience for budgetary reasons, but later found working careers both in front and behind the camera.

The Atmosphere throughout the film is both creepy and unsettling, credit goes to both the cinematography and sound design that highlights this overgrown abandoned piece of land that’s almost deathly quiet apart from the chirping of crickets and buzzing of flies. The film takes place entirely during nighttime, which only amplifies the eerie setting with limited visibility. Close ups of still scarecrows pop up numerous times between shots, making their appearance ever present and foreboding as they appear to almost teleport across the farmland without explanation.

The practical effects and costumes are the highlight of the film and an outstanding showcase from a 19-year-old Norman Cabrera, who was only doing effects as a hobby and was recommended by a local comic book store. For a special effects budget of reportedly $5,000, the costumes are wonderfully realized as decaying, oozing corpses, and the gore and mayhem is both wonderfully excessive and creative. Victims are not merely killed but rather eviscerated and reanimated into twisted parodies of their former selves. One memorable scene has a victim hollowed out and stuffed with straw and bloodstained notes from their heist. 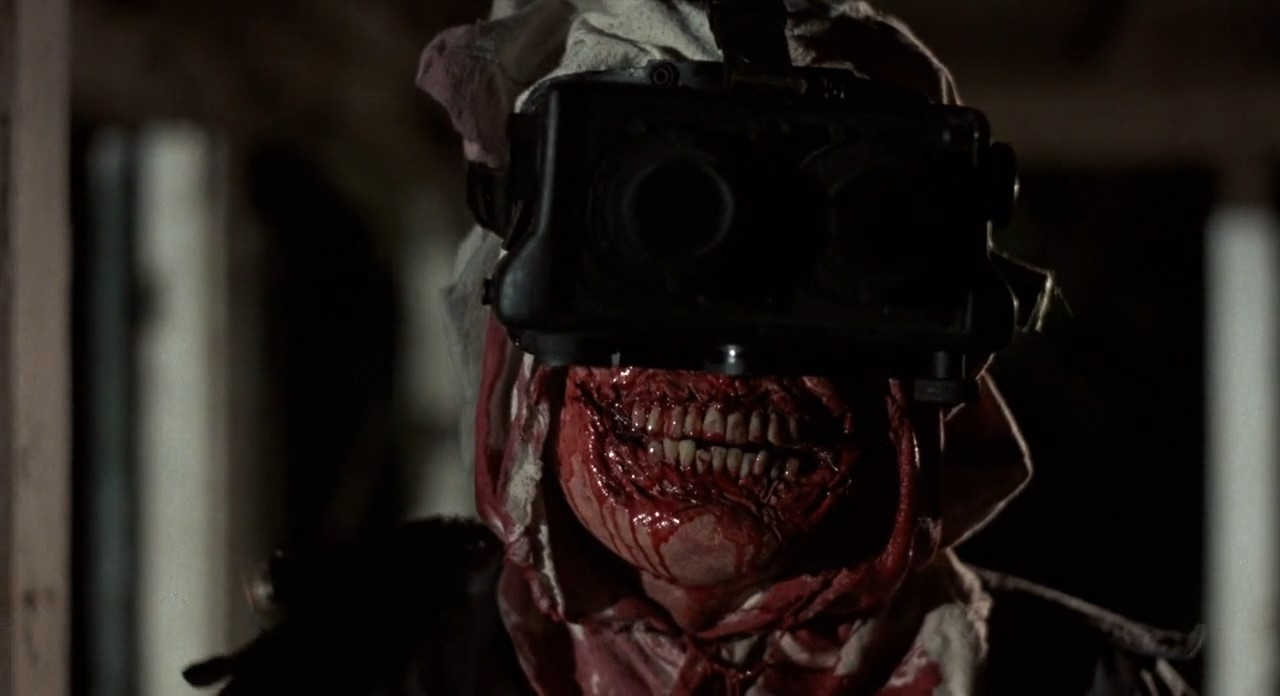 The explanation for the living/zombified scarecrows is never explicitly stated, instead it’s hinted at subtly within a desolate farmhouse containing a picture of three brothers and an occult like altar. There’s an even more interesting subplot at play; our characters might already be dead and stuck in some kind of purgatory or hell. Clues such as the satanic altar, the crucifixion of a victim, and a dialogue exchange about the heist explaining how easily they all got off despite the robbery going south adds to this theory. These moments where the films holds its cards and refuses to over explain or delve into exposition gives it a great sense of lore which explains why the movie has such a cult following.

While the film could have been a prime candidate for our category, Beer Goggles, I was too intrigued by the films premise and too scared to further liquify my liver in the name of writing. Scarecrows might appear to be another run-of-the-mill creature feature on the surface, but there’s a mythology to this film and a real labour of love by an inexperienced crew who have crafted a damn fine horror movie.