After pretty much completing the entirety of Disney+ within the first 4 months of subscribing, I’ve decided to embrace my cynicism and delve into the darker side of a company established to entertain and inspire children; and maybe also push an anti jew agenda (Walt, you piece of shit). Disney may have roots in adapting public domain properties for maximum profit, but it at least did so with a whimsical and creative approach. Many of their adaptations are watered-down retellings of much darker tales. That is not to say the studio has shied away from the macabre subject matter, acts of violence, and constant parricide.

Disney has a rogues’ gallery of dastardly villains we love to hate. From Maleficent to Gaston, the studio has crafted many memorable bad guys/gals for fans to argue over who’s the most rotten of them all. Yet, despite all these unique characters’ evil deeds, none can match the pure cruelty and unwavering immoral disposition of The Hunchback of Notre Dame’s Judge Claude Frollo. 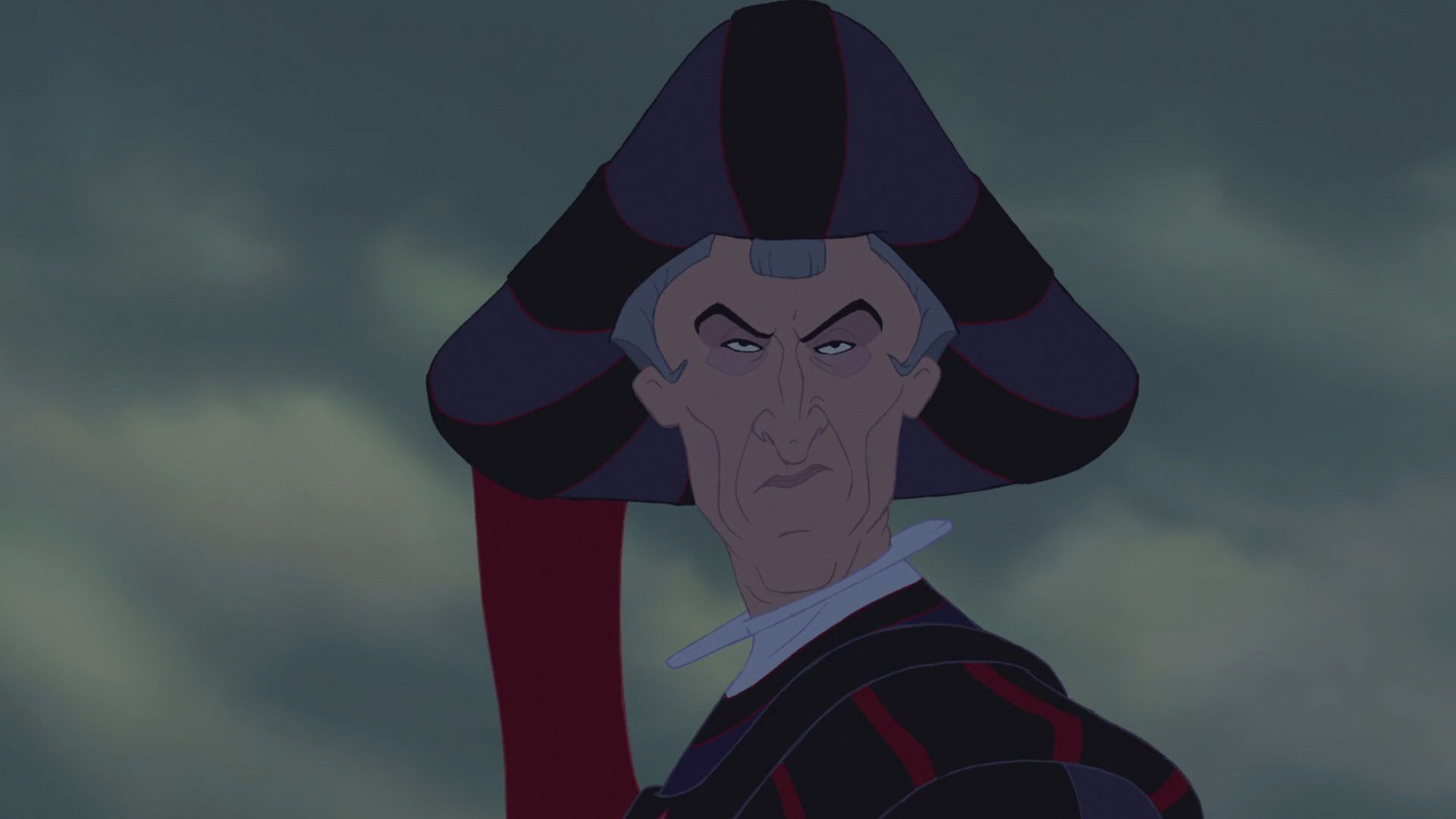 From the opening scene, we are introduced to Frollo’s ruthlessness as he pursues a defenseless woman through the streets of Paris. Her crime? She’s a gypsy, a subhuman in Frollo’s eyes, who must be exterminated. The pursuit ends in the woman’s death on the steps of Notre Dame Cathedral, where Frollo discovers she is protecting her child, the deformed Quasimodo. Horrified by the child’s deformities, Frollo prepares to cast the infant to its death down a well, save for the timely intervention by the archdeacon, who scorns Frollo for his cruel actions. Frollo is at first unfazed by the archdeacon’s words until he witnesses the judging eyes of the cathedral’s statues and, for once, fears for his mortal soul. Frollo adopts Quasimodo not out of regret but to atone for this sin he feels marks his pious self-belief.

This opening scene perfectly encapsulates so much of Frollo’s unredeemable nature. He’s a religious zealot determined to extinguish a minority group on his belief that they are inferior. This prejudiced genocide is fueled by Frollo’s belief that he is doing god’s work and is an extension of god and his swift hand of justice. For Frollo, this is his crusade to cleanse the city of Paris of those he deems lesser, and his dismissal of the archdeacon on the very sacred grounds of Notre Dame, the house of god, proves he’s a megalomaniac.

Frollo sticks to his word and takes a parental role over Quasimodo. What might be first viewed as a redemptive quality soon evaporates due to Frollo’s constant dismissal of Quasimodo’s interests and needless reminders of the hunchback’s unsavory appearance. Frollo looks to quench the young man’s curiosities by infusing his cynicism and bleak outlook on the world. Frollo has Quasimodo recite a humorously depressing version of the alphabet (A is for abomination, B is for blasphemy, and C is for contrition). It’s a conniving and manipulative tactic to keep Quasimodo within the Bell Tower as he’s a physical representation of Frollo’s sin and shame. It’s also effective as Quasimodo feels conflicted throughout the film despite Frollo’s increasingly hostile actions due to a sense of duty to him as a parental figure.

Hypocrisy is a particularly strong trait of Frollo as he justifies his detestable actions as necessary because of his position as the Minister of Justice but becomes conflicted by his chance encounter with the gypsy Esmerelda. While their first encounter leaves him embarrassed, he becomes obsessed with her, an unhealthy lust that shakes his faith. Frollo’s signature song, Hellfire (best Disney song ever!!!) is his proclamation that this desire for Esmeralda is clouding his judgment; this sudden onslaught of unhealthy feelings is tearing him apart as he wants what he has sought to destroy. In one of Disney’s darkest scenes, Frollo concludes that only he can eradicate her evil by making her his own, and if she refuses, she’ll burn at the stake. 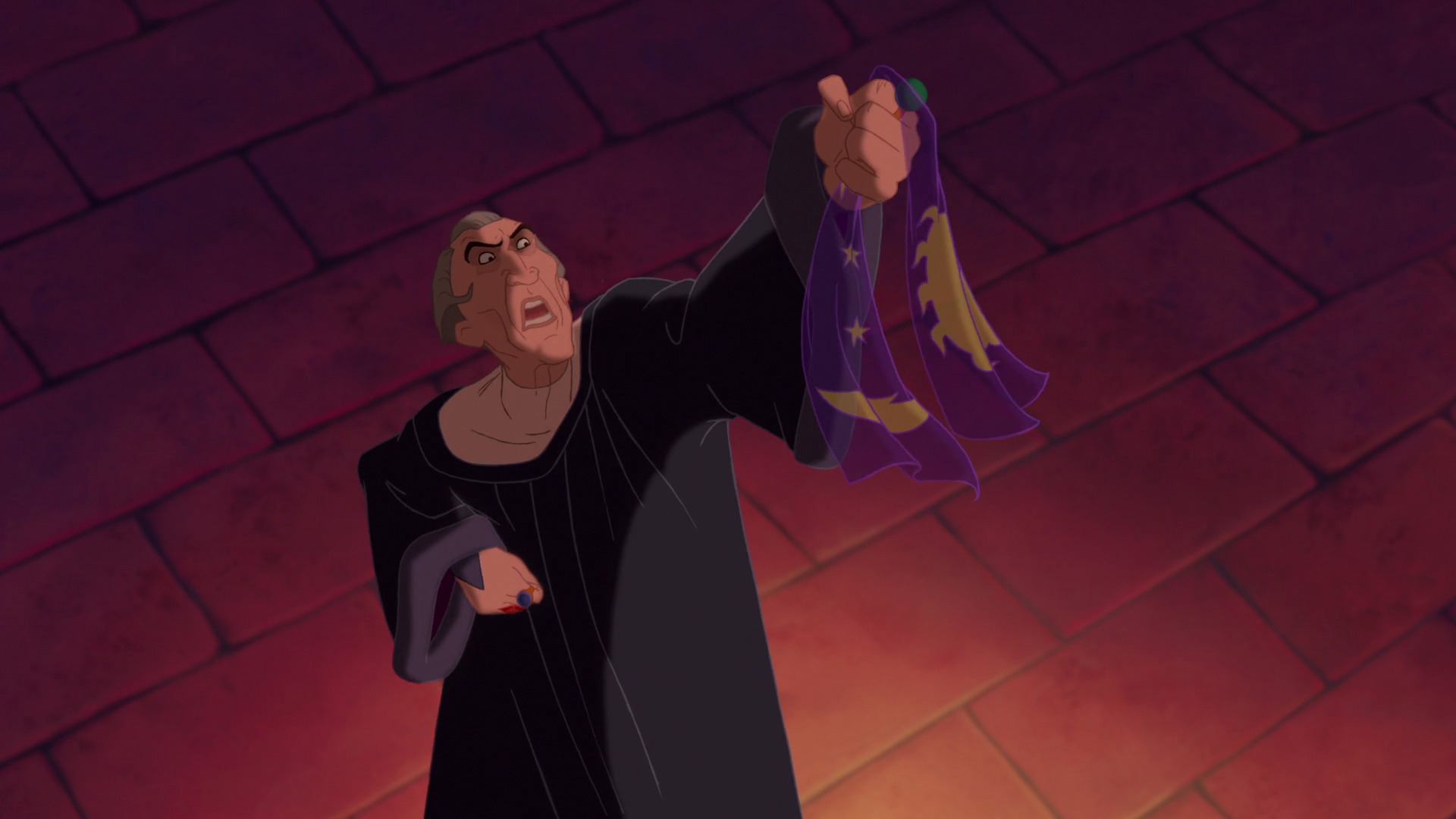 Hellfire is particularly chilling as Frollo chants his steadfast belief that he’s a righteous man with virtue, and yet we have seen earlier he looks down on servants as gods beneath him. He sings with conviction and confidence that these encroaching thoughts are an affliction, a test, as Esmerelda must be some kind of siren or succubus to bring forth these desires in him. The explicit intent of what Frollo means by Esmerelda becoming his may not be stated, but the line “Choose me or your pyre, be mine or you will burn” is undoubtfully sinister and suggests that Frollo seeks to make her some form of a mistress on the threat of death.

This twisted logic is a dark reflection of the recent expose of people in power using their position for sexual assault and more sinister intentions. The #MeToo movement has brought to light how these predators operate. Frollo’s declaration is a sobering moment that reminds us why The Hunchback of Notre Dame is considered Disney’s darkest story.

Many of Disney’s villains are portrayed as rather plain evil (Maleficent), dark reflections of the protagonist (William Clayton & Scar), or just opportunistic (Gaston & Hades); Frollo is a different kind of evil. Unwavering in his conquest to purge a group of people he views as vermin, Frollo takes pleasure in torture and death. A particularly chilling scene is where Frollo explains to Captain Phoebus his plan to find the gypsy sanctuary and wipe them out in one blow. The sole reason why Frollo is Disney’s greatest monster is that he’s a stark reminder of plenty of figures in our own history, driven by racism, lust, and bloodthirst while rationalizing it as gods will. For once, Disney displayed a character far eviler than the original source material.