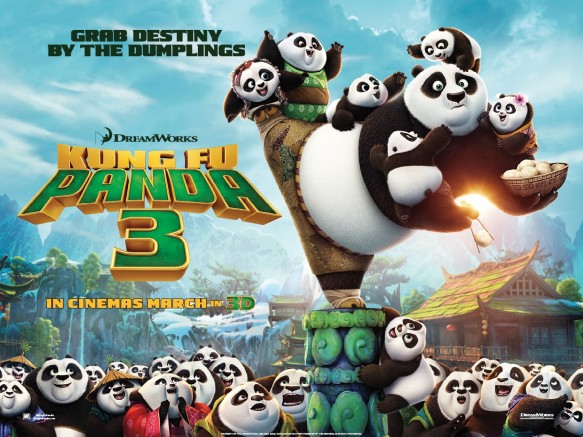 So its March already and I’m pretty embarrassed to admit that so far I’ve only seen two 2016 releases, which I must admit is pretty lackluster on my part. My current job has become increasingly demanding due to vital staff leaving and has unfortunately forced me to focus far more on it than I’d like to. Fortunately this should only be temporary and my output will increase drastically by the end of the month. In the meantime I promise to dedicate all my days off to working on the blog and seeing as many 2016 releases that I can. I’d also like to take this moment to thank all those who follow and view our site, this blog is my true passion project and for all those who have become part of that I truly appreciate you and the time you have invested in us.

Kung Fu Panda 3 was secretly one of the films I was most hyped for of the 2016 releases, I’ve been a massive fan of this series. When I saw the first one it was probably a year after it was released and I saw it on DVD with my younger brother, I remember having little interest in seeing it as it was released around a time when many animated films had become rather stale and franchises such as Ice Age and Shrek had plummeted in quality. My sole purpose for being on that couch was due to having nothing better to do in that moment in time, and thank merciful Christ I did because what a film it was. As a huge animated film enthusiast Kung Fu Panda was the perfect blend of action, humour and eye-bursting animation, I loved the ancient Chinese setting it allowed for beautiful backdrops. Then in 2011 Kung Fu Panda 2 managed to surpass the first on nearly every level, now in 2016 I can announce with great joy that Kung Fu Panda 3 has maintained the quality of the first two making the Kung Fu Panda a fantastic trilogy.

The Kung Fu Panda series in my eyes has the best animation out there, it cleverly switches between different animation styles and utilizes its Chinese theme to full effect. Most big release animated films have seen a massive rise in animation quality yet none are really showcased as efficiently as the Kung Fu Panda films. The vibrant colours and background palettes are jaw dropping but it’s the fight scenes that truly showcase how kinetic and spirited the animation is.

The voice cast for these films are crazy, such a great ensemble of talent and I was delighted to see the return of Randall Duk Kim as Grand Master Oogway from the first film. It’s amazing that all three films have retained all the members of the supporting cast considering how high some of their profiles are (Dustin Hoffman and Angelina Jolie can’t be cheap). The Furious Five are fantastic supporting characters and it’s great to see them return and still get their moments to shine although probably not as much In Kung Fu Panda 3 as the previous films as we get a whole village of pandas introduced. The newest big bad of the film Kai is pretty awesome in his own right considering he is a master of Chi (basically the force) and can consume others Chi and make them his minions, Kai is played well by veteran actor J.K. Simmons yet isn’t really as well-developed as Tai Lung or Chen from the previous movies.

Yet Kung Fu Panda’s strongest aspect always been its titular character Po, voiced superbly by Jack Black. Po is the true heart and soul of the series and we’ve seen him develop considerably. Each film presents Po with a new challenge to overcome yet each sequel has provided something new so as not to retread old ground, it feels more like Po is progressing to the next level. Po is as endearing as ever here as a superfan turned martial arts master; however Po’s world is shaken when his biological father Li Shang (Bryan Cranston) shows up. There’s a great family dynamic between Po and his two fathers with Cranston playing seamlessly off both Black and James Hong. Po still provides the bulk of the humour through his clumsiness, appetite and of course his mega martial arts fan outbursts.

Kung Fu Panda 3 wraps up the trilogy nicely providing a conclusive ending to Po and his comrade’s tale and while nothing has been said about any further sequels I would have no quarrel as long as they maintain the series quality. If there is to be another installment I’d love to see the return of Tai Lung in some form.