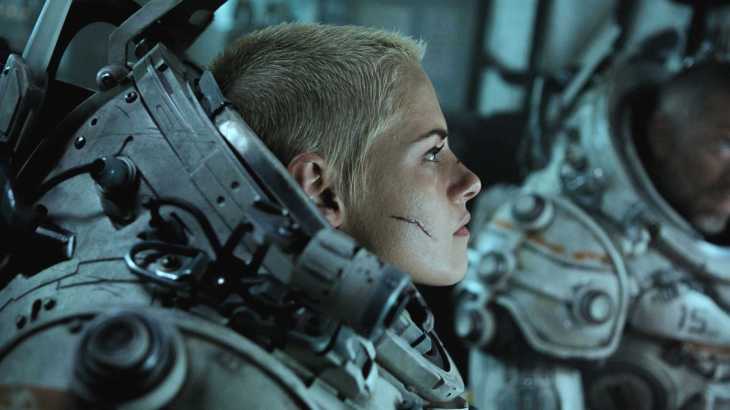 Underwater is a film we really see little of anymore, a mid-budget B movie schlockfest with an A list star that isn’t afraid to take itself seriously. Labelling the film an Alien rip-off is a pretty lazy criticism as we’ve gone through nearly four decades of films utilizing Alien’s basic concept of an isolated and claustrophobic setting where the denizens are preyed upon by some deadly creature (Hell, Roger Corman has been running with it for at least two of those decades). Underwater has far more in common with the aquatic creature features of the late 80s, such as Leviathan and Deepstar Six.

Set seven miles below the ocean surface, the crew of an underwater mining facility find themselves fighting for their lives as the hull is breached, and the facility begins to implode due to the deep sea pressure. With no other option but to evacuate the facility and move to the next underwater base, they must suit up and traverse the bottom of the ocean by foot. With limited visibility and little time, the crew finds their situation even more dire as they aren’t the only ones out in the open.

Underwater spares no time in getting straight to the action, within the first five minutes all hell has broken loose and our protagonists are on a mad dash escape mission. This frenetic pace and short runtime leaves very little fat in the script, a deal breaker for those expecting more in terms of character development and drama. For genre fans though, the pacing is a breath of fresh air, as the film is split into two halves, disaster and horror movie. The disaster elements are excellent as their predicament is ever escalating and their environment is deadly. The horror elements aren’t nearly as strong, relying too much on jump scares and cliches although I still found it more effective than most recent horror films, especially with the awesome creature design.

While I’m delighted to see a throwback creature feature, these films never really rose above entertaining shlock other than classics like Alien, Aliens, Predator or The Thing. Underwater squanders a pretty great cast of character actors, especially Vincent Cassel, who has been a wonder in French New Wave cinema. Story exposition is delivered ham-fistedly with cheap references to man vs nature, and TJ Miller makes an unfortunate appearance as a wise cracking side character who reminds us of how little we lost with his cancelling. When the film moves from first gear to let these characters breathe, only Stewart has anything in the way of an actual developed character to care about.

For a fan of genre film, especially science fiction horror, Underwater delivers a fast-paced popcorn flick with some standout thrills and scares. Stewart shines as our lead protagonist, a woman of action that doesn’t shy away from moments of vulnerability. The aesthetic of the film is equally great with claustrophobic interiors and some of the best suit designs in any sci-fi film of recent years. Where the film falters is in a paper thin supporting cast that wastes many of these solid actors talents and borrowing too liberally from the classics it takes inspiration from while offering little in its own voice.