Parabellum is Latin for ‘Prepare for War’ and that is exactly what this film is, a war! In recent years Keanu Reeves has given the action hero genre a much-needed rebirth like a phoenix rising from the ashes. Going back to periods of genre domination this is the opportune time for one to make a comeback. The golden age of martial arts films has faded but now John Wick: Chapter 3 brings back all those over-the-top action and fight sequences in a way which never ceases to amaze me.

The series is known for its long take action set pieces and this doesn’t change, the action sequence in John Wick 3 are some of the most well-choreographed I’ve seen in a long time. Keanu Reeves is willing to get his hands dirty in the stunt department, btinging the intensity and authenticity to a level that other action mvies usually can’t go. Where films like Mission: Impossible are about the scale, John Wick is about the brutality and how far they are willing to take it to leave audiences on the edge of their seats. Keanu is a man of few words in John Wick 3 but seeing how he lets his fists do the talking, this doesn’t matter as much. But what does matter is the appreciation you have to give the man for giving it his all in a very physical performance.

Once again, dogs come into this film in the form of two German Shepard’s owned by Halle Berry, who also pulls up her action sleeves. Her action scenes are where the true beauty of choreography and stunts are revealed because nothing goes missed. In some action films, the fights are either ruined by having the action too close or cutting too frequently. John Wick 3 suffers from none of these sins making its scenes feel like poetry in motion. Most of the action is shot very wide, treating the audience to a bigger piece of the action. The use of space in John Wick is fantastic, it makes the locations feel like a big toy box for the actors to play with.

I never expected this film to embody such vibrancy. I expect that the John Wick series has taken inspiration from films like The Raid series because I never thought we would travel to as many locations as we do in this film.  You have scenes where John Wick is walking through a stunning desert and lush streets of Morocco. The chic style and prestigious settings follow on from the last film with beautiful cinematography and flamboyant interior design. John Wick honestly looks like a video game with the camera following john in a third person format as he uses knives, guns, samurai swords, horses, motorbikes, etc. 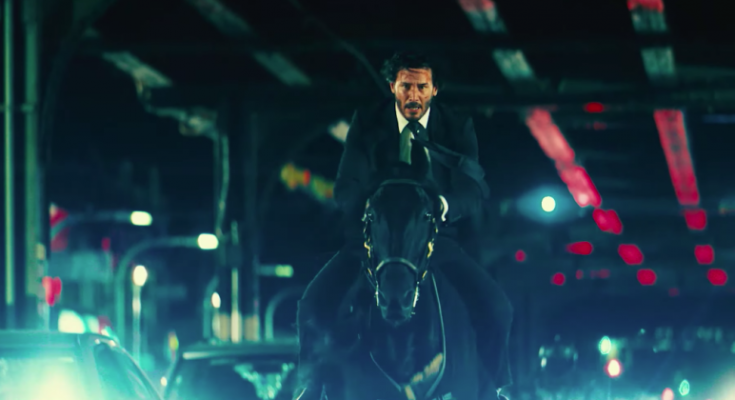 It’s fair to say that John Wick 3 has satisfied my craving for a well-choreographed call-back to the martial arts genre with a twist of modern-day action. I think this film falls under the category of ideal escapism flicks, the right frame of mind to see John Wick 3 is to soak in the physicality of the film, appreciate the effort the filmmakers have put into every action sequence and try not to think about it too hard. Thinking too hard will block any sort of artistry in the scenes from reaching your senses. The John Wick series has once again raised the bar for action and is a must see.