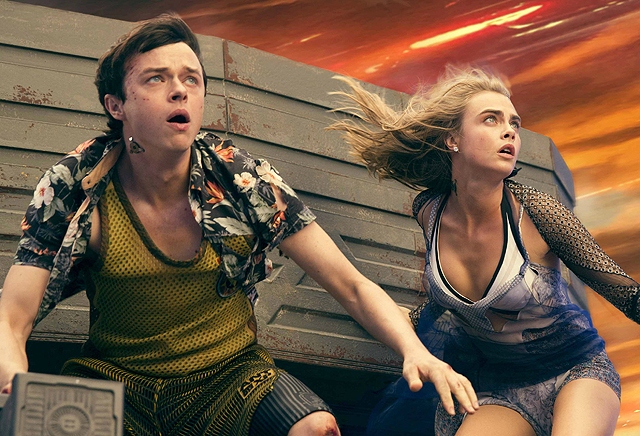 Rating: 2 out of a Thousand Beers

Valerian and the City of a Thousand Planets, is based on the comic series Valérian and Laureline, is very much an exercise of style over substance. Style way over substance, actually. There’s so much style that there’s not even room for substance, and the style itself isn’t even that impressive. There was nothing in the film to hook my attention or make me want to keep watching, and in the end, it was a very forgettable experience.

It might as well be titled Valerian and the Movie of a Thousand Smaller Movies Crammed into One. Frankly, it’s a mess. There are far too many clashing tones and a clunky story filling up the runtime, which makes each scene feel like a completely different film from the last. There wasn’t a sense of urgency to the action that made me want to get invested in it, so there were no stakes. I wish I could say I was inspired by awe and wonder at the sight of an interesting and unique science fiction world, but it felt so drawn out and assembled by a committee that I had a hard time ever caring.

Because of its “conveyor belt movie” feel that makes it appear more like a product than an actual story, Valerian lacks all human elements that could make an audience connect with the story. I don’t mean human in terms of species, since there is a slew of different alien races populating the world of the film, but I wanted some emotion that could draw me into the plot more. The characters are pretty poorly written, though, and they don’t have the greatest chemistry. It didn’t even seem like Valerian and Laureline, the two main characters, even liked each other. Their romance is stale and forced for much of the film, and I didn’t believe that it was genuine.

Maybe I’m coming across like I hated this movie, I didn’t. There are elements I enjoyed and an ambition that I admire. There were scarce but sweet moments between the two leads here and there, and a few action sequences that entertained me. Overall, the “meh” outweighs the good so much that it’s difficult for me to recall the good bits. The style of the film, while messy, is bizarre and unique and I can recognise that. The art direction is very colourful, and the locations and characters are strange and kind of refreshing.

There’s such an abundance of CGI and blue screen, however, that I had even more trouble becoming invested in the futuristic universe because it felt so artificial. It’s not that the computer effects are incomplete or lazily executed, there’s just so much of it that almost nothing is real. As a result, there isn’t much for the actual actors to react to and give an authentic performance with, so everything feels fake.

Valerian hoped to be the next big sci-fi/fantasy phenomenon, and I think many fans of the comics or just movie fans in general hoped the same thing, but nothing about it stood out to me as great, or even just okay. The characters are subpar, the CGI characters look like rubber and plastic, and the story isn’t something I was particularly interested in. Valerian isn’t a bad film, per se. I wouldn’t necessarily call it that. It is a sloppy one, though, that goes for something big and never quite reaches it.