While this is by no means the worst film of the franchise, it’s not the best one. It doesn’t overshadow the first or the second but plays a very nice homage to them both. There’s a lot of recreation of the more iconic scenes and it’s done very tastefully. I enjoyed this film, I’ll always be predisposed to enjoy anything to do with time travel because it’s a subject that opens up so many possibilities, unfortunately it is almost impossible to do without creating paradoxes. The Grandfather paradox is seriously strong in this one; but if you can get past that, it’s a very enjoyable piece.

This is the year of the reboot/extension where the films that were real trendsetters in the 80s & 90s are literally having money THROWN at them to show what the potential of the plot is like when CGI budget isn’t an option. Mad Max got the money treatment, and it worked amazingly well, Jurassic World got the money treatment and everything gets ramped up and this film is no different. What makes this just like the other two major box office reboots we’ve seen this year is that it stays true to basic plot (although a little messier due to their being more Terminators in this film at any one time than the others), it still has the basic cat-and-mouse bodyguard story. 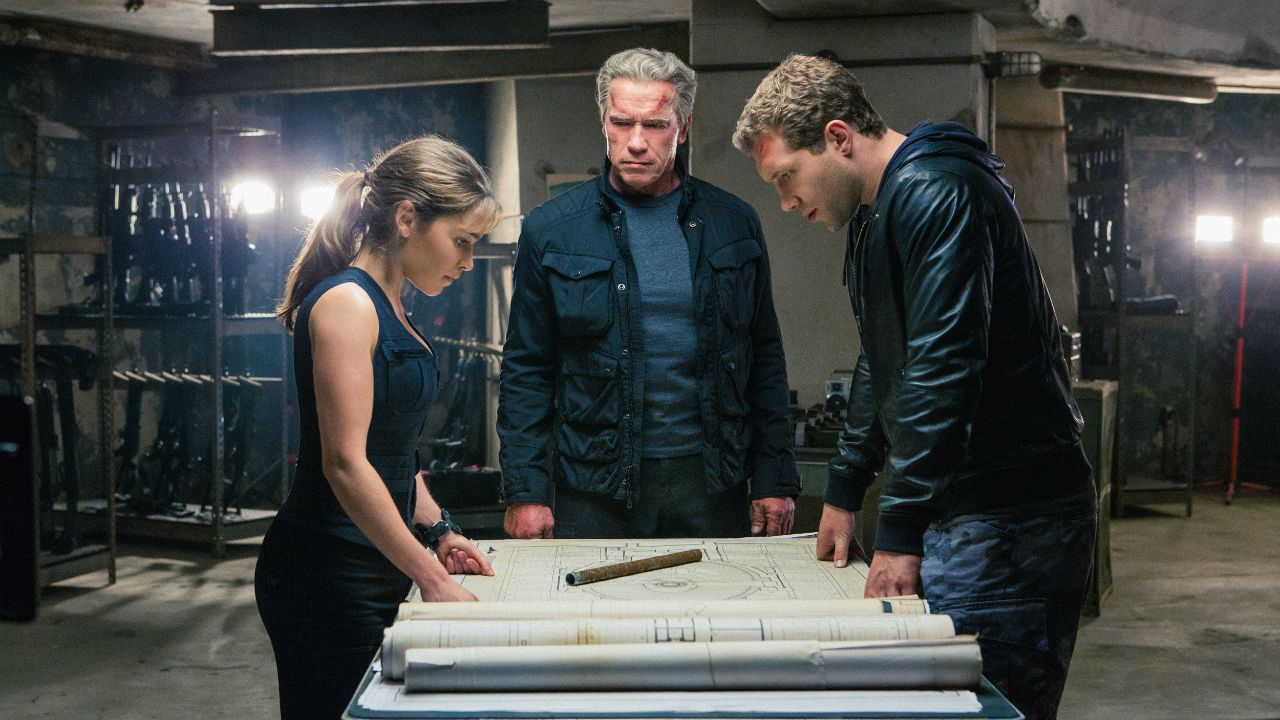 When I initially saw the remade Arnold come out and fight himself (excellent moment BTW), I thought he looked fake and rubbery, then I realised that that’s the point, the only reason the original ones looked so ‘lifelike’ is because they actually were just the actors- in this one some very subtle CGI means the skin has this very genuine ‘rubber stretched over metal’ look and it’s a nice touch.

They handle the muscular elephant in the room of Arnold’s ageing very well, and in a way that allows for more tension and humanity to the film and the character. There’s a lot of deus ex machina going on throughout the runtime, but the action is good enough that I can forgive it. The action is significant, and they really got the slow walking chase scene down to a tee. Terminator is probably the only film series where a character walking after someone can be just as menacing as a high-paced chase scene.

It’s a very enjoyable action piece with excellent pacing, Emilia Clarke does an excellent job in playing Sarah Connor. She’s arguably the best cast of the whole film. I went in with very low expectations but really ended up enjoying Genisys, and it’s redeemed itself from the mess that Salvation made of the franchise.

If you’ve enjoyed the series thus far, then you need to go and see it, it offers a lot of closure. If you haven’t seen a thing, then you might be a bit confused but the whole alternate timeline thing offers new viewers a chance not to be completely lost and the long-term fans a chance not to be bored and try to predict what’s going to happen – which was a smart move on Cameron’s part.

They’ve given it the same treatment that X-Men has been given with the first class and DOFP alternate timeline plot, which in one way opens up for new and less predictable situations, but really it’s the same film at the end of the day, replace Skynet with Genisys and it’s essentially the same thing. (Actually, the film is painfully similar to X-Men: Days of Future Past).