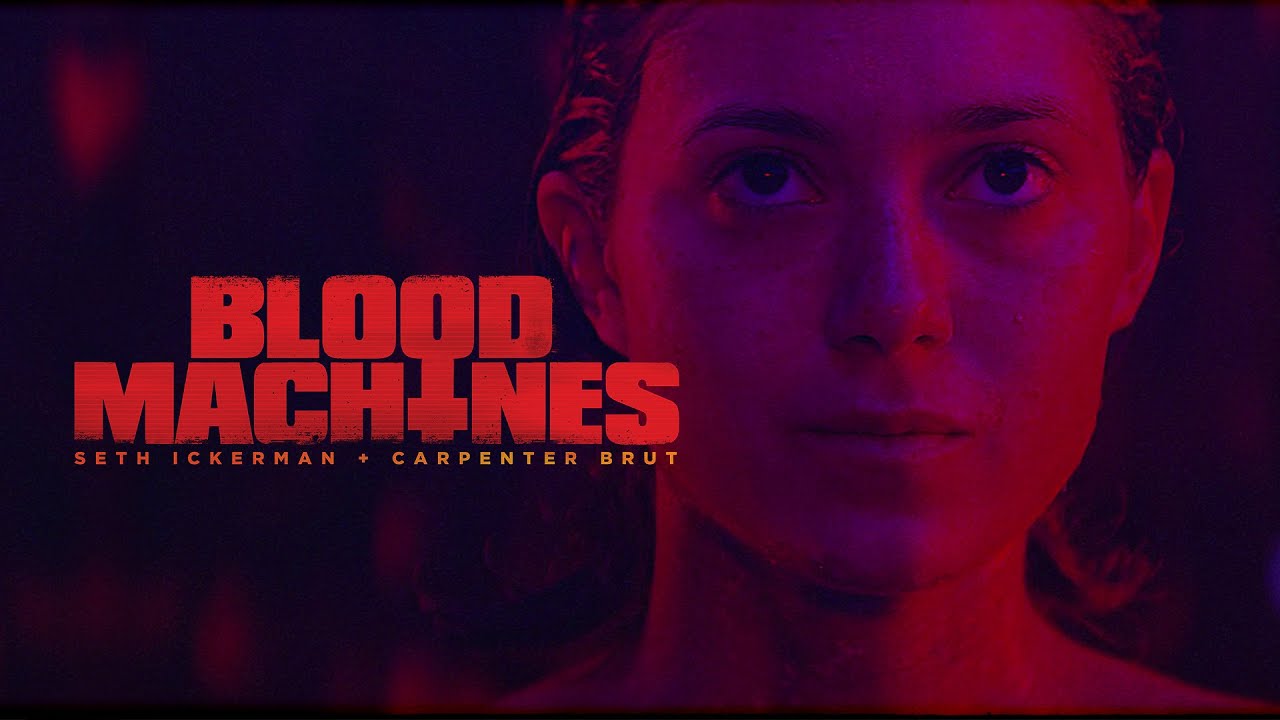 It has certainly been awhile since I’ve written about a series but an exception had to be made for the 3 episode extravaganza, Blood Machines, recently released on the horror streaming service Shudder. A joint venture between filmmakers Raphaël Hernandez and Savitri Joly-Gonfard (under the pseudonym ‘Seth Ickerman), and synth wave artist Carpenter Brut, Blood Machines is an intergalactic opera split into 3 chapters for a total runtime of 50 minutes. Listed as an “experience”, this episodic space epic is a spiritual sequel to Carpenter Brut and Ickerman’s last collaboration, Turbo Killer, a balls to the wall viral music video encapsulating the retrowave chic style and 80s B movie cheese in all its glory.

Blood Machines is a celebration of experimental filmmaking using vibrant otherworldly colours, a thumping soundtrack, and heavy symbolism to create a truly unique feature dripping in 80s retro aesthetic. Science-Fiction/fantasy, spectacular trippy visuals, and synth heavy soundtracks are a collaboration we unfortunately see too little of, because otherwise I wouldn’t focus on any other genre of film. Funded through Kickstarter, the visuals on display are nothing short of mind-blowing with a universe that feels thoroughly developed with such a short runtime. Taking influences from the works of John Carpenter, Panos Cosmatos, and various retro video games, the feature never borrows from any particular property, instead Blood Machines crafts its own distinctive piece of pop culture fiction sure to produce plenty of posters and HD wallpapers.

Composing a plot summary feels arbitrary considering the features focus on style over substance, but I’ll do my best. Two space hunters close in on a downed spacecraft piloted by fierce women. After a tense standoff, they witness a strange phenomenon: a naked woman emerges from the hull of the vessel and ascends into the sky, like some kind of spirit belonging to the spaceship. Both driven by intrigue and greed, the hunters pursue the entity across space to capture.

Striking symbolism is integrated throughout from christian imagery such as crosses and angelic figures to the physical representation of souls within machinery. Raphaël Hernandez and Savitri Joly-Gonfard masterfully display their creative flourishes through a narrative which embraces cosmic entities and science fiction on a grand scale but touches on themes of oppression, patriarchy vs matriarchy, greed, and empathy. I couldn’t tell you a lot about art, but I truly believe Blood Machines is what many would consider an authentic piece of art.

The “experience” certainly lives up to the word in full, but the feature suffers from some pretty shaky acting and less than spectacular dialogue. The breakneck pace of the episodes leaves very little time to get to know the characters or what makes them tick, instead we get glimpses into their personalities with usually overly exaggerated results. Anyone looking for a coherent story will be left scratching their head because Blood Machines offers little in the way of an explanation for unfolding events; instead asking the viewer to take a leap of faith and go with it. Mostly I was onboard, but the NSFW symbolism heavy finale never quite landed the ending satisfactorily.

An acid dripped space opera with explosive imagery and a thumping soundtrack, Blood Machines is one of the most immersive experiences I’ve had in recent memory that thoroughly scratched my synthwave 80s aesthetic itch. It blew my mind without the assistance of any chemical or liquid enhancements and left me wanting more from this dynamic collaboration.