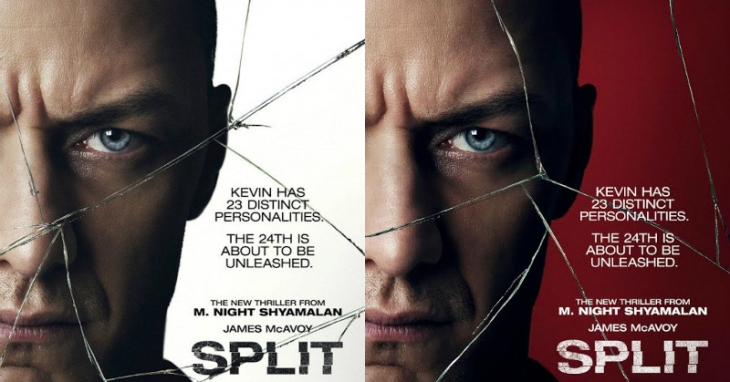 Rating: 4/5 of some sort of mixed cocktail.

If you have a slight actor based man crush on James McAvoy’s acting abilities since you saw the movie Filth like I did, then the draw is obvious; a movie, with 24 versions of James McAvoy all in conflict. If you’ve been worried about M. Night Shyamalan ever since he made Mark Wahlberg talk to trees for 90 minutes and are wondering if he is back to form or not, then read on.

M. Night Shyamalan has evolved slightly since the days of the sudden twists and dramatic revelations in his films. Split is more subtle than his other work in that sense. Unlike films like Unbreakable, where it’s plausible that ‘this may not be real’ Split is more direct with the audience.  Like his masterpiece ‘Signs’ everything is absolutely happening and it’s never really called into doubt. I think this is a much better way to tell a story like this, it’s a thriller, it doesn’t have to play with your head like his other films to create a sense of unease. True to form he slots himself into a scene like so many other great directors, keep an eye out for him!

While there is no doubt that this man has lost his collective mind and we don’t really know who’s in the driving seat, and that these girls are absolutely in danger; the film does a great job of creating some security and hope in certain scenes. Between the personalities, you’re pulled into a comfort zone and then ripped out of it again. For example, the first time he appears in a skirt sporting a chipper British accent is hilarious, it gets a laugh and the whole thing is absurd. As the film develops and you see how dangerous some of these personalities are it gets less and less funny every time one of them comes out with something mad. There’s amazing conflict in this film, both with the main characters own battle over the spotlight for each personality but also over the supporting cast who begin to realise what’s happening and end up in a thrilling catch 22.

On the subject of laughs, decisions about comedy relief being used to subvert tension into outright panic based scenes are made here to turn what would be a shitty horror film about a lunatic, into a complex thriller. You’ll know when you see it, there’s dancing, it’s great, and then it’s terrifying. I’m jealous of his moves, to be honest.

James McAvoy plays the hell out of this crazy bastard! At a technical level, between the accent changes, the subtle facial queues and even the different postures of each split- he is just seamless! The great acting made better by exposition. You are legitimately scared of this fabled beast who can have all of these other versions of the man terrified. This kind of meta self-discipline is present as he acts out certain scenes of them all arguing over control of Kevin’s body. As the film develops you really do go along with the mentality of ‘ok, this one isn’t the same person as the last‘ and all credit must be given to the actor for that.

The whole thing reminded me of, and shares a lot of features with the film 10 Cloverfield Lane- again, you know this is a captive situation, but you’re not sure of the danger or who to trust. If you enjoyed that then Split is definitely for you.

That said, this thing is made to be turned into the next ‘scary movie’. And that isn’t a dig at the film or a concept. It’s a complement to the story being told that you could sit down, telling the same story, and make it hilarious! We know that M Knight and the crew responsible for Scary Movie have a bit of a parasitic relationship and I would love to see this be the next thing in their list. I mean, just for a second if one of the personalities had been a sassy ghetto receptionist or something I think my lungs would have collapsed from laughter.

Also, for the multiverse and continuity nerds amongst us, your vigilance will be rewarded in this film with a fantastic cameo rounding the whole thing out for us!

Let us know what you think, and give us a like on the official tweets of this review, it really helps us out! (psst, that’s what gets us invited to premieres where we can do more reviews for the fans!!)

4/5 for #Split, James McAvoy plays the hell out of this crazy bastard! @Universal_Irl https://t.co/OfP5cRZ2jq … pic.twitter.com/EykAnRPaPT