The aquatic horror genre has strangely risen from the depths this year with the earlier release of Underwater and now the Irish horror, Sea Fever. The deep blue sea still remains a topic of mystery with vast amounts of the depths unexplored, a mystery that has remained a topic of interest for filmmakers, especially in the horror genre. We take comfort in what we can rationalize or what other, smarter people can, but when faced with the unknown, humanity is at its most vulnerable.

Irish horror films are a pretty rare commodity, most take their premise from our countries rich folklore, and their overall quality is a pretty mixed bag. Sea Fever stands out from the rest for going the route of a science fiction and aquatic horror. Last year, the Irish horror film The Hole in the Ground massively impressed me with its eerie atmosphere and its commitment to make such a cliched and familiar premise feel fresh. Sea Fever appears cut from the same cloth with a premise that reflects horror classics such as The Thing and Alien but with a less fantastical approach to its filmmaking. 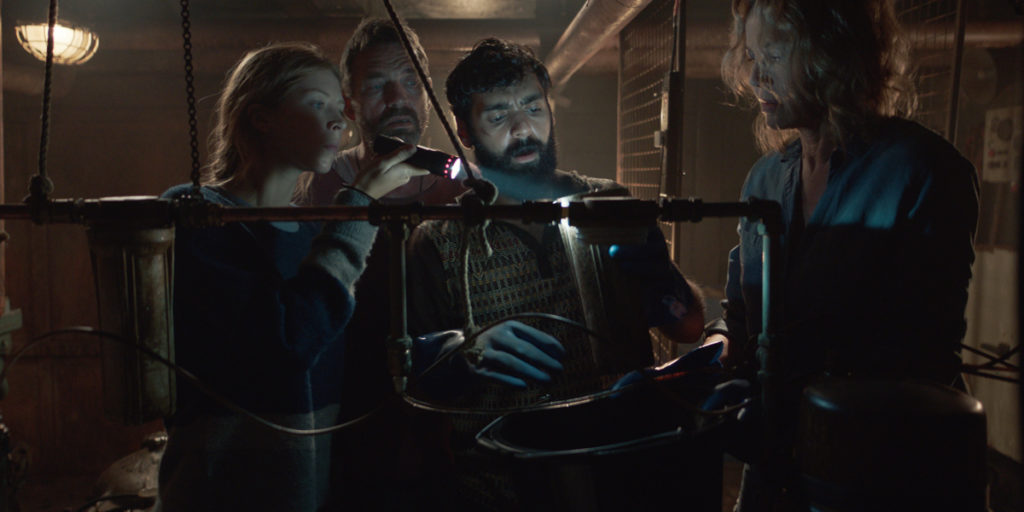 Socially inept marine biology student Siobhán is assigned to a field study on a fishing trawler to research “anomalies” amongst the catch. She receives an icy reception from the superstitious crew due to her solitary nature and red hair, which is believed to bring a poor omen to anglers. Gerard, the skipper of the boat, is in dire financial straits and ignores warning from the coastguard of an exclusion zone which just so happens to be the location of their catch. The ship is suddenly ensnared by strange tentacles, and the crew is hopelessly marooned at sea.

The creature aspect of the film arrives a lot earlier than expected, a huge blue translucent cephalopod which anchors itself briefly to the boat. The effects here are serviceable, as it’s shrouded in enough darkness to hide its veritable mass and form. The creature is both familiar but also completely alien, a life form which you believe has never been discovered before. Its arrival is quickly overshadowed by how soon it disappears, seemingly losing interest in the crew as they breathe a sigh of relief and carry on. Unbeknownst to the shipmates, the creature has released a contagious substance on the deck.

Sea Fever might be the most unintentionally timely film I’ve ever seen. The aspects of a deadly and infectious pandemic which has struck the boat mirrors our current predicament of the COVID-19 outbreak. The importance of quarantine and avoiding physical contact with others seems like an unintentional parody of the events shaping the world right now, as the film echoes the sentiment of responsible self isolation for the safety of others. The conflict of rational thought and responsibility versus superstition and panic is an all too real cautionary tale for our own uncertainty that lies ahead.

One of the biggest strengths of the film is ambiguity, the script only ever reveals what the crew and Siobhán know. She may be an expert in marine biology but its uncharted territory, and so we have a narrative that unfolds as they try to tackle the issue with what little knowledge they have at hand. Sea Fever is not a groundbreaking film, and flaws such as painful early dialogue and familiar story beats become apparent. Fortunately, the film comes into its own by the midpoint and characters are better expanded on. The climax feels rushed and sort of fizzles out rather than conclude the moral conundrum it presents.

For a modest budget and simple story, Sea Fever is an effective little indie horror that confidently works within these boundaries. Relying on tension and paranoia over jump scares makes the sudden moments of gore and horror even more shocking. It’s a strong debut from the talented director/writer Neasa Hardiman, who has crafted a claustrophobic and strangely relevant creature feature in a genre that has been sorely lacking in years.