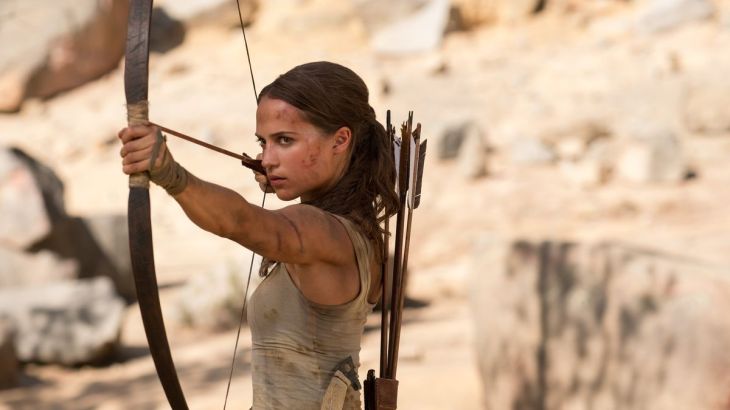 No matter how many seem to fail, Hollywood is still putting their stock into video-game movies blinded to the countless failures that have come before. The genre is so universally despised even gamers share little enthusiasm with every announcement. They’re two very different mediums with each bringing a different experience to the table. Generally, when they are combined, they become misinterpreted or poorly realized. Even we could only muster a handful of entries to our top 5 video-game movies list.

If you grew up in the 90’s and owned a PlayStation, odds are that you have crossed paths with Tomb Raider. The franchise helped to boost Playstations stock and was a massive selling point for the console. The games were also excellent sporting high octane action, dynamic level design, difficult puzzles and an infamous protagonist. Lara Croft is without a doubt the most well-known female video-game character. Her earlier design was of a well endowed but capable female explorer that blurred the line between strong female lead and/or shameless male fantasy. Regardless, Lara Croft became a sex symbol both inside and outside of the video-game industry.

Seven year’s after the disappearance of her father, Lara Croft is working as a bike courier and is struggling to eke out a living. Lara also happens to be the heir to a fortune but has chosen to reject her families riches and prestigious upbringing to make her own way life. After an accident leads to her arrest, she is visited and bailed out by her aunt in order to sign her father’s death certificate in order to prevent her family’s estate and assets being seized. However, an artifact left for Lara in her father’s will gives a map and details to his last known whereabouts. Her father also left her instructions not to follow in his path and to destroy his notes on a mysterious island as its secrets could lead to catastrophic events if they were to fall into the wrong hands.

The film takes most its inspiration and aesthetic from the 2013 reboot of the game series. This reboot redefined Lara as a younger, inexperienced explorer who is forced to adapt and learn when she is stranded on a dangerous island. The characters design also changed drastically, with a more youthful and certainly less sexualized Lara. The game focused solely on Lara’s development into a more empowered character as she shakes off her vulnerabilities and learns how to survive on her own instincts and skills. It’s a shame this film missed this point entirely.

Most of the character development for Lara in the movie takes place within the first thirty minutes of the film. She start’s off as a more than capable fighter, puzzle solver and archer and rather than grow her skills over the film, instead, she’s given Daddy issues. Lara’s whole driving force in this film is to find her father, she starts off the film in a rut due to her father’s disappearance, her entire story arc revolves around her father. Vikander is a great actress and helps carry the film with a physical and painful performance but it’s frustrating when the lead is so poorly realized.

The lack of urgency to Tomb Raider is painfully evident when we spend nearly the first half of the film establishing the characters and backstory through stilted dialogue and shoddy flashback scenes which regurgitate the same information more than once. All this takes place in England where there is no threat or immediate danger forcing you to keep your eyes open as the film slogs on. Finally, when we get to the island we are greeted to a sweaty and crazy-eyed Walton Goggins who inflicts his sparsely written and generic villain on us. Even the action scenes fail to spark any kind of excitement as they are shot in such a bland manner.

Tomb Raider is some of the least ambitious filmmaking I’ve seen in a long time and that’s taking into account a lot of the low effort and even lower quality blockbusters constantly being churned out by Hollywood in the last decade. Rather than use the decent source material and concentrate on a more personal story of survival and self-development, every aspect of Vikander’s, Lara Croft, is dumped within the first thirty minutes. Bland and sparse action sequences and shoddy GCI only further diminish an already painfully uninteresting movie. Tomb Raider is best left unexplored,