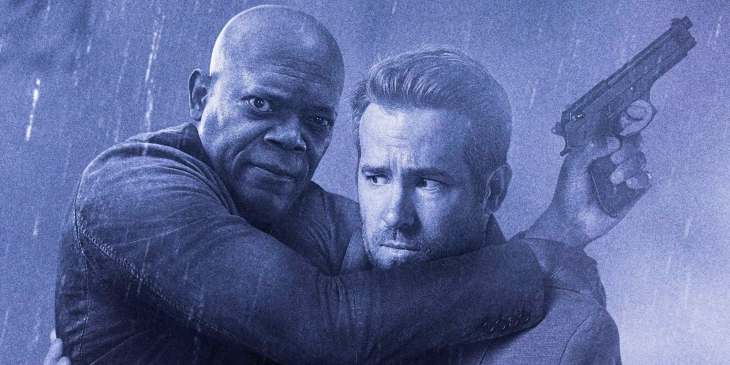 Last year saw the release of a brilliant homage to the 80’s and 90’s buddy action genre, The Nice Guys, from the pioneer of the genre itself, Shane Black. Unfortunately not enough of you assholes showed up to see it making one of the best films of last year a flop. It was a resounding message that this Hollywood staple was well and truly a thing of the past. Apparently, Patrick Hughes didn’t get the memo and has thrown his two cents into this extinct genre.

Darius Kincaid (Jackson) is one of the worlds deadliest assassins but also a key witness in the case against a Belarusian dictator (Oldman), accused of genocide. Interpol is tasked with getting Kincaid safely to the Hague to make his testimony in front of the International Criminal Court. Soon things go tits up as the envoy is ambushed and Interpol agent Amelia Roussel (Yung) is forced to enlist her bitter ex-boyfriend Michael Bryce (Reynolds), a disgraced protection agent, to get Kincaid to the Hague. Unfortunately, the pair has a spotty past together which leads to all that odd couple bickerings and disagreements you’d come to expect from this genre.

The selling point of the film has been the matching of Samuel L Jackson and Ryan Reynolds in a foul mouthed, fast paced action romp, and for the most part, the two leads deliver. Unfortunately, there’s very little in the way of actual comedic scenes or jokes. Most of it is just the two screaming and swearing at each other. I must admit that Jackson screaming “Motherfucker” is a joke that just never seems to get old and he’s certainly enjoying himself spouting it out as much as possible. The chemistry between the two leads is solid and carries the film for a lot of its overlong runtime, the problem is that the rest of the movie surrounding them is as bog standard action fare you can get.

For a film parading itself as an action comedy, it does a pretty poor job of blending them together. In fact, this film has some bizarre tonal shifts as it tries to drive home how evil the villain is; there’s a scene early on where the dictator shoots a mother and child and later on a truck full of explosives drives into a crowd (A bit close to the bone considering recent attacks across Europe). It’s frustrating as I feel an action comedy should find ways to integrate comedic aspects into the action scenes rather than having a comedy scene followed by an extensive action set piece.

Ultimately, The Hitman’s Bodyguard is a fairly vapid film that seems better suited for a hangover day on the couch. While there are a few laughs it doesn’t justify the admission price. Coming at the tail end of a cramped Summer, the film would have been better suited as a January release where most passable movies are shipped off to be seen and forgotten.