For the first 15 minutes of this reboot, there was a strange moment where I felt that this film was unjustly torn to shreds by critics, perhaps, just maybe we were getting a different retelling of this infamous character. A retelling that might be a little closer to the original character all the while retaining the comedic side of Del Toro’s own rendition of the character… And then another hour and 45 minutes fell clumsily forward and highlighted why this film deserved the crown as one of the worst films of 2019.

Disappointment is a strong word, especially when every trusted source is preparing you for the full definition, but I was reserved to the fact that Hellboy 3 by Del Toro was never coming and perhaps Neil Marshall could produce something refreshing as his filmography has been consistently solid and his work in television. This was not to be. Hellboy not only is soulless and derivative in storytelling but also relies on hyper-violence and crude humour for entertainment value thinking it’s wearing its R rating as a badge of honour where in reality it’s more like a participation medal. I appreciate toilet humour and flashes of gratuitous violence but here it’s tiresome and childish. Hundred of years ago, the Blood Queen Nimue waged war on the world of man with her army of monsters. She is tricked and slain by King Arthur, who cuts her to pieces and has her body parts buried across Britain. In the present day the B.P.R.D., a mysterious organization that deals with slaying monsters gets wind of a plan to revive Nimue and sends their best agent, a monster named Hellboy to investigate reluctantly. Hellboy discovers a sinister plot that would see the rise of monsters and struggles with why he hunts those similar to him.

One aspect of the film I can’t fault is David Harbour; he’s dripping in charisma and he delivers plenty of silly lines with a comedic timing few actors could pull off. When the film focuses on Harbour’s Hellboy for the first 15 minutes, it’s pretty enjoyable. As for the rest of the cast, they’re awful. It gives Sasha Lane and Daniel Dae Kim no chance to shine with poorly written characters with terrible jokes and exposition-heavy dialogue, these are proven actors given nothing to work with. Even worse is the always reliable Ian McShane delivering such an unenthusiastic performance he looks ready to doze off at any minute. 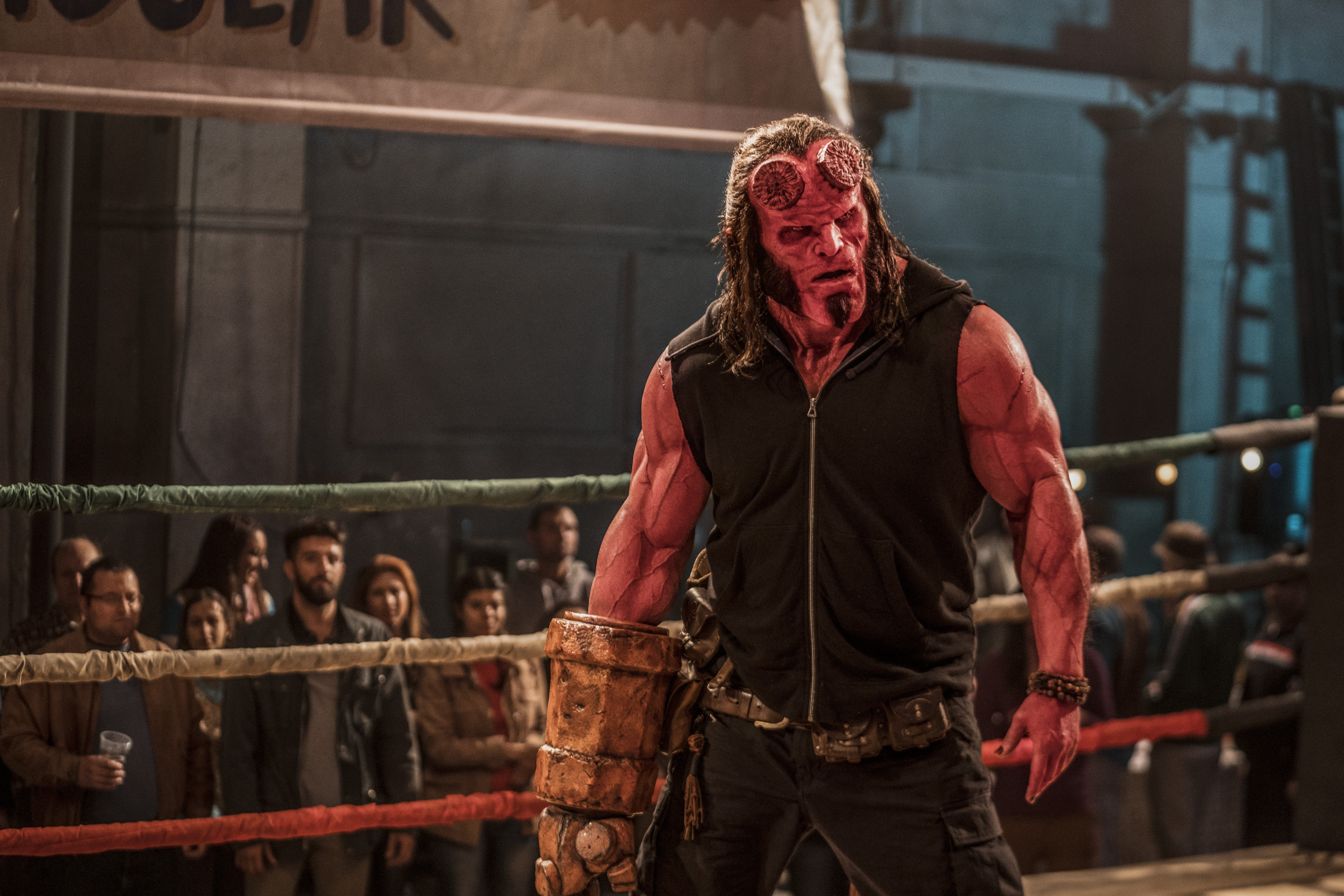 There are two elements of the film that are so completely at odds with one another it ruins any aesthetic the film may have been going for. First, the special effects are the pits; they’re dreadful and even worse is how reliant the film is on them. Most of the ‘spectacle’ sequences are ugly computerized sludge. On the other hand, the practical effects and creature costumes are fantastic. The actual costumes are gnarly and gross with insane attention to detail and contortionist brought in to give the monsters an unnatural and creepy movement.

Whereas the original Hellboy movie was a colourful and tamer version of the source material, it took its time to build its world and the mysterious B.P.R.D. (Bureau for Paranormal Research and Defense) and introduce its rogue gallery of characters which was even more fun. Hellboy 2019 just trudges from scene to scene with heavy exposition and shoddy CGI fight scenes with little direction and zero entertainment. The enthusiasm and attention to detail of the Del Toro films are nowhere to be seen and will only leave fans of the character with an even more bitter taste in their mouth.