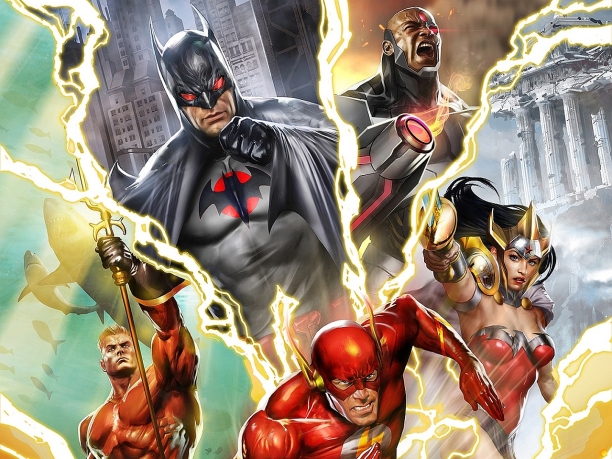 This film needs no introduction – we’re looking at Flashpoint Paradox! The jewel of WB animation Flashpoint is a fully fleshed out and cohesive tale featuring the Flash. The sleek and hard-hitting, anime-influenced style works perfectly for this much more mature and action-packed story, but when I say mature I mean it: this is the bloodiest, most violent, and downright hardcore DC animated film to date.

Whether that violence is too much or not is up to you, the best way to describe the gore is when one character getting his helmet gets broken open, then gets a face full of bullets and all we see is the blood splatter out. These gratuitous deaths of countless soldiers, favourites making a cameo, and even main characters have that Die Hard sense of fun about it, but it takes a depressing turn at the end. The brutality reaches the tipping point where it’s not so enjoyable anymore, most notably when a child gets straight up killed and we see his body flop to the ground with unblinking eyes.

The Flash is fantastic in the film as well leaving you with no doubt as to why he got his own standalone film. He uses his powers in clever ways with the animation being visually striking, while the script features a heartfelt story about his relationship with his mother and the way he deals with both grief and responsibility. Voice actor Justin Chambers does a superb job adding emotional weight and heroic conviction to his lines, although there’s one scene near the end where he’s beaten and broken yet he doesn’t sound weary in the slightest. He is opposed by the Reverse Flash, who has his same powers, a yellow version of his costume, and a pair of haunting red eyes. Voiced by C. Thomas Howell with a deep and chilling tone, he fills every moment of his time on-screen with an unnerving dread.

While Flash does a great job, it’s Batman that is the real gem of the movie. Again, I’m going to try to dance around spoilers, but suffice to say that this isn’t your grandma’s Batman. When he doesn’t get his way with a villain, he chucks them off the roof with no intention of catching them with a grappling hook at the last second. He wields dual-pistols and aims for the head. And, consistently earning a laugh throughout the film, he often likes to take a big sip from his flask of Jack Daniels, (his Bat cave desk contains two pistols, bullets and a bottle of JD. It’s Fantastic). The story explains this succinctly, which makes it okay to enjoy this gun-toting, alcoholic Batman without reserve.

One flaw that the movie shares with the comic is that we don’t get enough time with the main villain, the big war, or any of the other supporting characters aside from Batman. You’ll see all of your favourite heroes and villains from Green Lantern to Lex Luthor, but their role in the story amounts to nothing more than glorified cameos. A lot of them are fun, especially Ron Perlman’s Deathstroke, but they do little to add to the story and instead just exist to serve fans who want to see their favourite character make a quick appearance. Those kinds of cameos are always cool, but it’s hard to ignore that entire scenes spent introducing more and more new characters end up meaning little in the long run.

Not to spoil the ending: but one of the greatest scenes in the all of DC animated movies comes in the final moments in the movie with Flash & Batman talking in the bat cave (You will know when you see it). It’s done beautifully and will bring a tear to any Batman fan with the final line “You’re one hell of a messenger”. (Fun fact this is also Kevin Smith’s favourite scene).

The character models are quite clean-cut, while director Jay Oliva uses them to execute brutally impactful fight scenes. The choreography is top-notch here and will have you on the edge of your seat with each reversal. As I’ve said, this is a world where no one is safe from dying (Game of Thrones meets DC comics), so the tension of each fight reaches astronomically higher levels than any DC animated movie we’ve seen before.

Overall this is a giant must see for any superhero fan – it’s a perfect example of how to take a comic story arc and bring it to a two-hour picture. As I said at the start, this is the crown jewel of DCs animated features and is one to be in the conversation of best comic movie.