This is not a sports story; it’s a drama and a tragedy film embroiled in the middle of an athlete’s life. This is a resurrection story, and one about growing and learning to be more than what you label yourself as. That said, I was blown away by the sporting scenes, the raw intensity of the fights coupled with what is refreshing to see, a professionally choreographed series of fights that are realistic. So take one thing if any away from this review- this film is good enough at telling its story, that it can be a film with phenomenal sporting content, but is not a sports film and need not ride on that, but it can still keep you entertained and suitably pumped.

It showcases the downward spiral that is Billy Hope’s life after the tragic loss of his wife and the self-rehabilitation process that eventually puts him back in the ring. While that seems clichéd and one-dimensional, let me assure you that this story has a depth and raw, painful grit to it that challenged what a lot of other films portray as this glorious and glamorous sport. Where Rocky would show him with a bad shiner the next day after his fight, Southpaw shows Billy Hope as extremely damaged after his fights, barely able to hobble around his echoing mansion.

It has some flaws- villain lacks motivation and you never get justice on the wife’s death, just some brief and one-dimensional closure and it gets a bit cheesy towards the end. A sudden gentrification towards the ‘Hollywood’ finish where I expected Hope to shout out “Adrian!” But nonetheless it is an exceptionally good film. Also it is a little bit farfetched that the world champion can lose ALL of his money and house and possessions within the space of one month, and the way he is pushed back into the ring by his agent is highly unrealistic but it does serve the purpose of showing you how the talent is treated.

The film never really grounds his motivations, referring to anger management and drug/sobriety issues, but then ultimately his saving grace is that he learned to block a punch. Something that, let’s be honest here- he wouldn’t have ascended to the world champion without knowing how to do already.

Rachel McAdams’ short but pivotal part in the film gave her a chance to showcase a nice range in her drawn out and heart wrenching death scene. While we’re on the subject of strong female characters; the young actress who plays his daughter is one to watch out for in the future.

Another redemption that Southpaw takes over the Rocky films and other boxing tales is a very realistic physique on the boxers. Gyllenhaal actually looks like a boxer, he clearly went through some gruelling training for the role but the physique and body type are just spot on, along with some of the most realistic fight scenes in terms of technique I have ever seen on the silver screen.

If you are in any way in an emotionally fragile state of mind, you will fall apart during some moments in this film. The couple next to me in the cinema went through a hilarious whispered compromise because the girl wanted to leave as it was too sad but the guy wanted to stay because he paid for dinner, and really just came out tonight to see this and convinced her that she’ll be more upset if she doesn’t get to see him fix his life- well played my friend.

It is sad. It is raw. It is genuine, and it is a very dramatic decay, transformation and rise that translates to some slightly hollow but still touching character development.

I have mixed feelings about 50 Cent in this role, because I hate him, but his character is very hate-able in it… so it works? In the film he’s a terrible person using boxers as a mean to an end and plays perfectly into the film’s critique on people who leach off the success of others. Which is exactly what Curtis (I can’t call him 50 cent anymore, that’s a goddamn amount of currency not a name) does, he manipulates and takes advantage of horrible circumstances to make some money and drops Hope when his life falls apart because he can no longer make money from him- so you get why you’re supposed to hate his character. And it’s good that you can understand this through his actions because every time Curtis Jackson opens his mouth you can’t catch or understand a single syllable he mutters, and that’s why I hate him because he ruins scripts by just mumbling lines and taking away from the performance of talented and professional actors around him in scenes. He’s a bad actor; sue me. 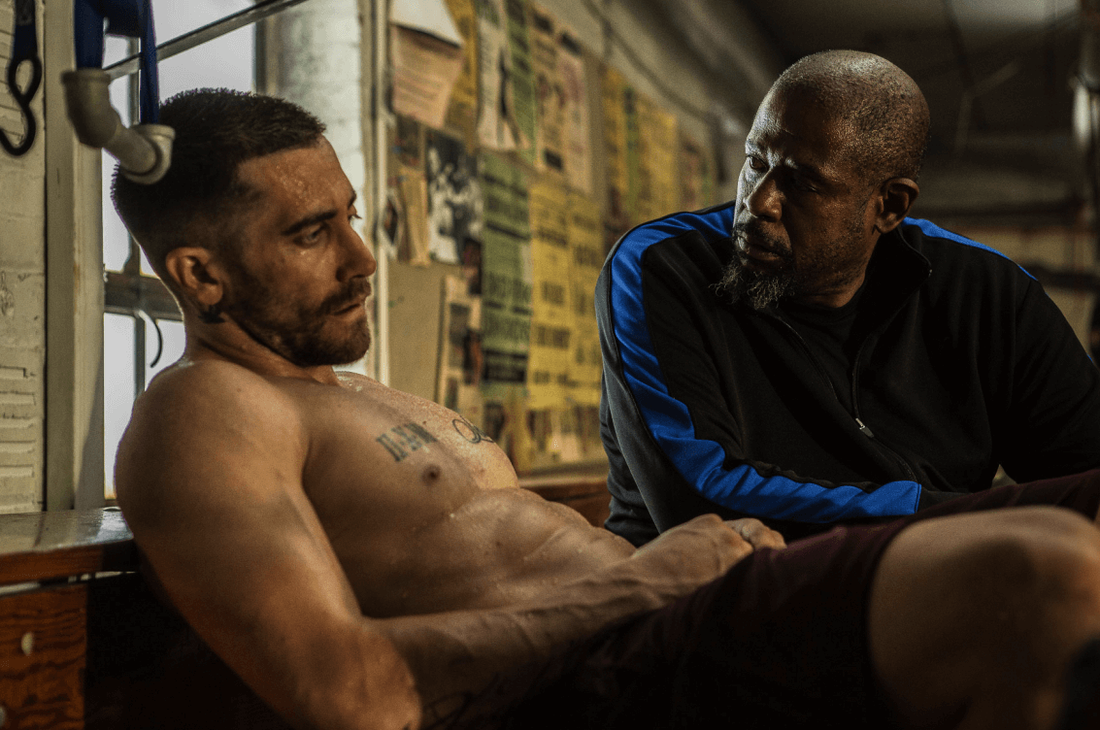 You will be bet into the back of your seat, you will be leaning forward and bobbing your head to try to see the fight better and you will be fighting back tears and reassessing your life during this film, right after all that you’ll regret being talked into buying a large meal at the kiosk when you see the sort of shape Gyllenhaal is in. I really enjoyed the film and I was delighted to see it didn’t just fall into the trap that films like Rocky and Warrior and even The Fighter did to some degree of being a fighting film with a few sad scenes to break up the fights, no, it’s a gripping drama with some near perfect fight scenes to add pace.

If Eminem had ended up playing the role, it would have been a forgettable film with excellent cinematography. But Gyllenhaal killed it, he’s really positioning himself as a long-term leading man. He never gets the press or hype of Tom Hardy or Ryan Gosling (both superb leading men)…but he’s quietly putting together the sort of career where he’ll still be making interesting movies at 55.

He’s been in some great films: End of Watch, Zodiac, Brokeback Mountain, Prisoners, Source Code, Nightcrawler, Brothers & Jarhead aren’t embarrassing, either. I’m not a big Donnie Darko fan, but it’s an important cult teen flick. He’s now got Southpaw, Everest and Nailed coming up. He’s having the sort of career that Edward Norton should’ve had. He’s always projected vulnerability and decency. But now he’s projecting a lot more menace and darkness as well. It’s kind of awesome. Also, if you need something to listen to in the gym- the soundtrack is phenomenal!