Of course, it would all go wrong; it wouldn’t be a Jurassic Park movie without the chaos that Ian Malcolm predicted in the first film. However it’s the chaos that makes us love these films, we don’t want to see a film about a successful theme park where everything goes to plan, no what we really want to see is some crazy dinosaur action. I am delighted to reveal that Jurassic World has all the chaos one would expect and turns it up to 11. Jurassic World is a blast, sure it’s silly at times and a whole lot ridiculous most other times, but it’s so entertaining that it’s allowed to up the crazy factor.

Colin Trevorrow took this troubled film which has been in development Hell for over a decade, took the gene splicing idea from the original script and took the film in a direction I did not see coming. While Jurassic World is inferior to the original film, it had to be expected; Jurassic Park is not only the benchmark for box office films but is also a benchmark in filmmaking. Jurassic World is easily the second best film in the franchise.

The film takes place 22 years after the original film on Isla Nublar. InGen has not only cleaned up their monumental mess but have actually created John Hammond’s vision and made a fully functional theme park. However, due to rising operational costs and declining consumer interest, the staff of Jurassic World has created genetic hybrids. Before you can say hold on to your butts, our characters realise how very little control they have and they must now stop their newest attraction from causing all-out chaos.

Chris Pratt is our main protagonist here embodying the role of alpha male both literary and figuratively, his character, Owen Grady, is like a more focused version of Pratt’s Star-lord character for Guardians of the Galaxy. Pratt’s charisma is infectious, and he has truly established himself as a leading actor. Bryce Dallas Howard looks like she’s having a great time in her role, yeah she’s given some cheesy dialogue but it can be forgiven as the tone of the film is more fun than serious. Nick Robinson and Ty Simpkins had me nervous early in the film as they appeared to only be used as a plot device to guide us through Jurassic World, however both their characters are well developed as the film goes on and become more likable. Irrfan Khan as Simon Masrani was one of my favourite characters of the film, both providing the humour and taking on the role of a successor for John Hammond.

The real star of Jurassic World is the Indominus Rex. Colin Trevorrow said that the Indominus Rex was “meant to embody [humanity’s] worst tendencies. We’re surrounded by wonder and yet we want more, and we want it bigger, faster, louder, better”. The Indominus is no dinosaur, it’s a monster, a genetically engineered killing machine. This isn’t a creature of habit that needs to kill to survive, the Indominus is Frankenstein’s monster suffering from an identity crisis and an even worse temper.

Yes, it is an excellent piece of fun film. Emphasis on the word fun, which lets it have some real creative freedom that reminds me slightly of games I would play with a stack of toys when I was younger- just carnage and creativity.

Fun aside, the film comes with a theme, and it isn’t very subtle about telling us that. The theme of this film is control, and how you can’t control nature, which ties in with a very Frankenstein like concept of man playing god and having it go horribly wrong for him.

I don’t know if it’s a stark message about humanity or just a plot device but I noticed how that when this amazing new gene-splicing technology is perfected it is immediately monetized, weaponized and then commercialized. It is a testament to the screenwriters that you can show the creature slaughtering people not to be the villain.

Without going into spoilers, a thing I was worried about was how they would handle this film with respect to the original. They do this very well, with some beautiful recreations of the more iconic shots from the original and great visual nods- just watch for the red flare moment.

The pacing is fantastic but then the third act comes along and blows everything into overdrive- some excellent POV shots of the dinosaurs during a midnight human/raptor tag team hunting session left me feeling like a kid again and it only gets better from this point on. The third act of this film and the things that are made possible with the CGI and good storytelling are what really push this into absolutely jaw-dropping territory. 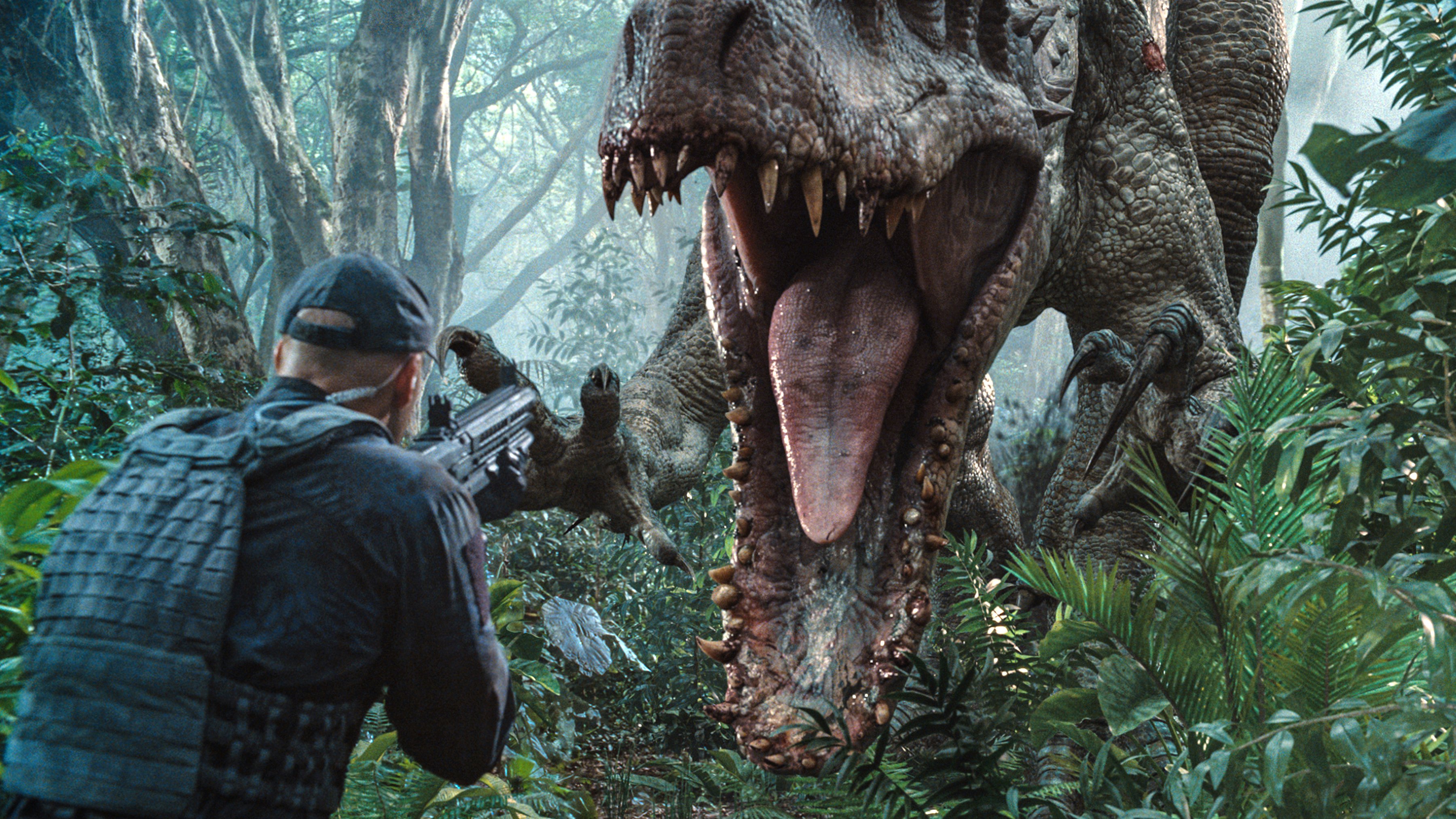 A slight problem with the film is a problem all mass audience films face with the ‘something for everyone’ template where there is a slight bit of romance shoved down our throats, but it’s used sparingly and can be forgiven for it.

Pending a rewatch, I spotted a couple of slight continuity errors in the production, but then again with what they do in the third act, I could overlook just about anything that comes before it.

I must both praise and fault the film’s costume design. The attention to detail in Chris Pratt’s costume was excellent. But then you shoot across to our female who apparently does all of this adventure and running around in the jungle in a pair of heels.

The fact is this is more than just a fun film, this is an adrenaline-fuelled piece of controlled carnage that gives you enough of action and tension to be really excited about seeing and I feel like it’s revived theatres a bit.

Yes, there is product placement, yes there are a few Hollywood moments, but this is an exciting film that left me speechless for nearly an hour after it and in a good mood for the rest of the day, a mixture of relief that they didn’t screw up this franchise and joy in what I had just seen play out in front of me in the what I hope will become famous final scene.

Too long, didn’t read? Just look at this image below.