For an entire category dedicated to getting blasted and suffering through some lesser-known B movie, you’d think Covid 19 and a nationwide lockdown would be the perfect time for multiple entries for Beer Goggles. The issue is, I’ve been less than sober for the vast majority of my recent viewings, and focusing on quality films during this time has been pretty great for my sanity. Now feeling more settled and with the world returning to somewhat of a norm (I’ll still knock out a granny if she comes near me without a mask) the itch to further assault my liver has returned and my watch list on Netflix has greatly increased with some weird-looking movies.

90s horror doesn’t get much praise; coming out of the 80s, popular franchises like Nightmare on Elm Street and Friday the 13th had run their course and were no longer grabbing attention of horror fans. Creature features and paranormal horror films during this era were looked upon as lesser knock-offs of more popular films, and the genre was looking pretty barren. Wes Craven’s meta horror smash, Scream, brought new life into the genre and paved the way for more self-aware horror films, its impact can still be seen today. A film that released a year later and had no impact whatsoever is Wishmaster……… A perfect Beer Goggles candidate!!!

The film opens in ancient Persia as a voiceover warns us of the Djinn, demon genies, one of which is wreaking havoc in the emperor’s palace. Thankfully, there is a local wizard handy who traps the genie within a red ruby and hides it away to never be found. The problem with these demon genies is they grant 3 wishes, usually the wish is a gruesome or fatal twist on your request, and upon granting 3 wishes the Djinn and his whole posse will be released to wreak havoc upon the earth. A real fucking shame when an accident at the docks in the movies present time (the 90s) releases the ruby which falls into the hands of a jewel appraiser (Tammy Lauren) who then releases the Djinn which then kills some people and takes a human form (Andrew Divoff), who then finds out the appraiser who released him must grant the three wishes, while the appraiser can see the Djinns misdeeds and must find a way to defeat it. Unfortunately, there isn’t a second wizard handy.

From the opening scene, the film is gloriously violent. Over-the-top gore and ridiculous death scenes are littered throughout in the most comedic and ironic ways. Directed by special effects wizard Robert Kurtzman, the practical effects are fantastic and creative throughout. What hasn’t aged so well is the laughable CGI. I had to rewind a few times to make sure it wasn’t the one too many cans affecting my vision. 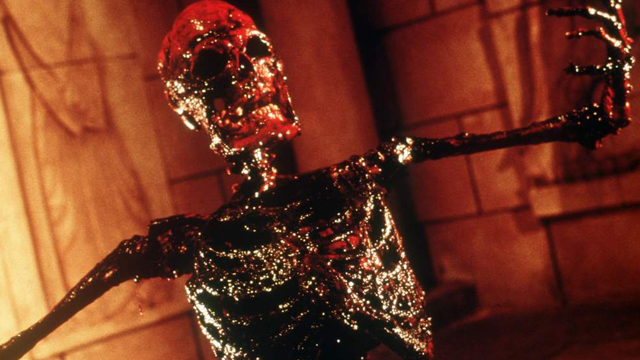 While breaking the seal for the 7th time I glanced over the film’s IMDB page and was surprised by the talent involved. Wes Craven was the leading producer as well as the Hellraiser films writer Peter Atkins. The amount of horror legends popping up in cameo rolls like Tony Todd, Ted Raimi, Kane Hodder and many more are wonderful little Easter eggs, each getting their own gory demises. Andrew Divoff was my favourite aspect of the film as the gravely voiced, wisecracking villain. His presence remains menacing and entertaining throughout.

So far I might give the impression that Wishmaster is some kind of underrated gem unfairly written off by critics. Issues such as shoddy CGI and horrible supporting actors bring the film down. Even my drunk self couldn’t forgive it. Wishmaster seems like a last ditched effort to recreate the horror villain series of the 80s, but instead of being the new Freddy or Jason, Wishmaster comes across more like Leprechaun. The film became a series with 3 sequels, all declined in terms of quality and budget, which is even more grim considering how little there is in this film.