There has been plenty of time to digest Annihilation since its release on Netflix in March, so much so I’ve managed to re-watch it and read plenty of interpretations on it for different perspectives. It’s rare in this day and age that a film leaves itself so open to interpretation. Studios have had very little faith in audiences capacity to accept a films ending to not have a straightforward conclusion and have regularly clashed with directors to reshoot or rewrite scripts in order to craft a more audience-friendly experience. Annihilation was the first film in a long time to have me scrambling through my own thoughts and theories to conceptualize what I had just experienced. Needless to say, this film has been somewhat of an enigma from me.

Biologist and former marine, Lena, are left confused when her soldier husband, Kane, arrives home unannounced after being MIA on a top-secret mission for a whole year. At first, he seems dazed as he can’t remember much at all, but things take a sinister turn when his organs fail. They are intercepted and abducted by a shadowy government organization who are monitoring an unexplained phenomenon called “The Shimmer”. The Shimmer is a rapidly expanding area which distorts all within its confines including perception of time, plants, wildlife, and even humans. Kane’s team were the last to enter The Shimmer and Kane is the only member to return after multiple other teams have disappeared within it. Lena joins the next task force entering The Shimmer to find answers to save her husband.

After directing the fantastic Ex Machina, Alex Garland propelled his name to the top of the list of directors to watch. Many, including myself, were waiting with a vested interest for Garland’s next film. Unfortunately, Paramount Pictures did not share the same enthusiasm after initially giving him $50 million and free rein to adapt the renowned science fiction novel, Annihilation. After Mother! bombed and proved divisive among casual filmgoers, Paramount got cold feet and producer David Ellison called the film too intelligent and demanded reshoots. Thankfully, another producer sided with Garland who both refused to rewrite or reshoot the movie, so Paramount gave the film a limited release in America and dumped it on Netflix for global distribution with very little marketing from both parties.

Despite the behind-the-scenes drama, Annihilation is one of the best films of the year so far and another amazing entry to the science fiction genre which has been going strength for strength the last couple of years. The film is beautiful, and it’s hard not to feel robbed here in Ireland when we didn’t get to see it on the big screen. The Shimmer is beautifully bizarre as it both looks familiar and alien as flora, fauna, and wildlife are redesigned to this new environment. Ben Salisbury and Geoff Barrow deliver a gripping soundtrack utilizing melancholy acoustic guitar to pulsating and haunting beats through a synthesizer. It’s a soundtrack I’ve revisited a little too many times on Spotify. 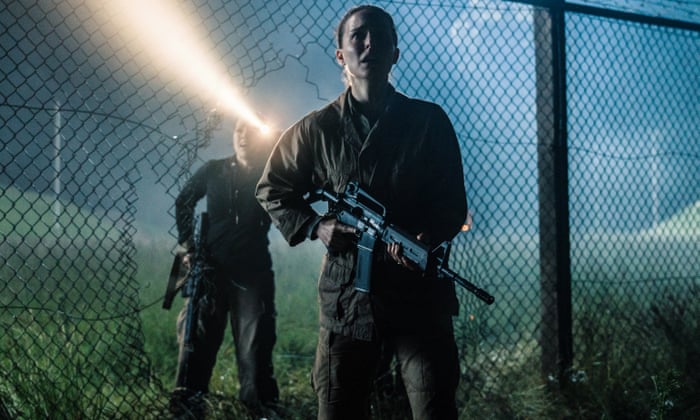 Annihilation is not the kind of film you can sum up in a single sentence, it effortlessly weaves through genres infusing science fiction, horror, and thriller with a central mystery that unfolds in only more questions but never feels infuriating. The most obvious theme from the film to decipher is self-destruction and how it doesn’t necessarily derive from a cause, that it’s as unexplainable as chaos. The events transpiring in The Shimmer contradict the logic we know or even the very few phenomena that the team can explain themselves. It’s the absence of logic and fear of the unknown that unearths which leads to self-destruction among the team. What’s more impressive is that the team is made up of highly intelligent and capable women, which makes their descent into madness even more unsettling.

Most impressive about Annihilation is despite its central mystery, heavy themes and commitment to world-building, it still is contains plenty of thrilling scenes. Garland uses the fear of the unknown to integrate horror into many sequences with one unforgettable scene with a mutant bear that ramps up the terror to eleven, one of the scariest scenes in recent years. The climax of the film is something to behold, it’s an inconclusive conclusion that has divided many audience members leaving many in the dark. It never quite achieves the level and quality of Ex Machina but it’s hard to replicate or follow up on near perfection.